Hallmarks of Ragnar ́s painting are experiments with material and handcraft. It is a basic attempt to understand what a painting actually is. This implies an exploration of the nature and the problems of painting (its potential and limitations) and the question of what to paint (content) and how (technique). His process has been characterized by trial, search and error. By this he has opened up for possibilities and learned about new materials and techniques. The serial working process allows a significant shift between different styles and materials.

Often, he allows coincidences to occur in his paintings which he afterwards approaches as a craftsman by the use of various machines and hand tools. The coincidences only become useful when they have been worked out; they can be eliminated, allowed, emphasized or brought into a particular form. The approach is deeply influenced by his background; but as a young man he took an education as a furniture maker and later he worked making prostheses. This is where his interest originated in the use of industrial materials and industrial crafts. The dialog between him and the painting, between logic and accidents, between the traditional expressionistic painting and craftsmanship, between his predetermined goals of the painting and the impact of coincidences therefore has multiple roots.

Recently he has been working with epoxy colored by oil, which often is supplied with printed text from divers industrial materials. By this he creates several layers that are characterized by shifts between flat planes of color giving an illusory depth. Thereby the viewer cannot fully see what the inner layer implies but can only assume that there is something happening in the depth of the painting. The text becomes diffuse like an unconscious memory or the hidden influence of our modern society. In this way there is a clear psychological impact on his works. 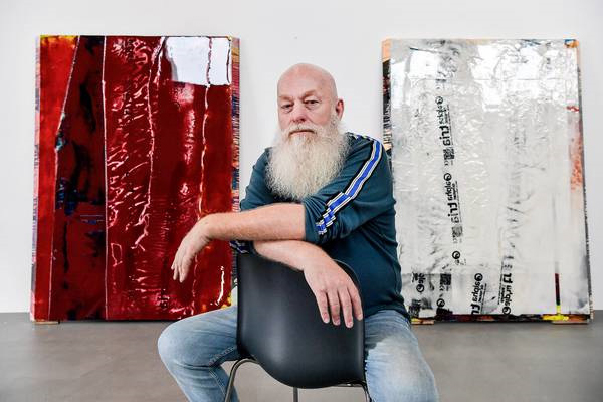 Ragnar Stefánsson was born in Reykjavik but now lives and works in Sønderborg in Denmark.

He studied first art in Icelandic College of Arts and Crafts followed by School of Visual Arts in New York with teachers that that have a great variety in their approach to art, like Michael Goldberg, Jackie Winsor, Jan Groth and Joseph Kosuth.

After returning to Iceland he participated in several exhibitions both there and in Sweden. Later, he took an education as a psychologist which coincided with a break in art-creation for few years. In 2012 he began anew with photographs and in 2014 he started with his paintings again. After that there has been no return for him to a “normal” life; he has been increasingly engaged with his paintings and exhibitions. Now he only works part-time as a psychologist.